In the Publication Manual and in many, many blog posts here, we refer to both references and citations. If you are new to writing with APA Style, you might wonder “What’s the difference?” Like this apple and orange, they are created separately but work well together!

References appear at the end of a manuscript. They follow a who–when–what–where format. For example:

They appear (a) so you can give credit to your sources and (b) to provide a path for your readers to retrieve those sources and read them firsthand.

Citations appear in the body of your paper and point your reader to your references. For that reason, we sometimes call them in-text citations. They are also sometimes called simply cites. Citations can appear in a paper in two ways:

Include them in a paper to support claims you have made and/or to provide the sources for paraphrases and direct quotations. 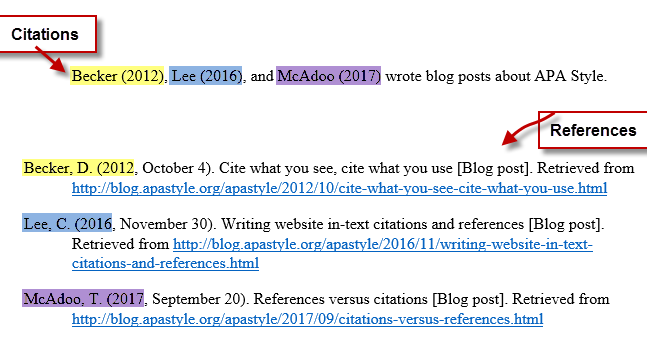 Each fall we put together a “best of” post to highlight blog posts and apastyle.org pages that we think are helpful both for new students and to those who are familiar with APA Style. You can get the full story in our sixth edition Publication Manual(also available as an e-book) and our APA Style Guide to Electronic References, in addition to the pages linked below. 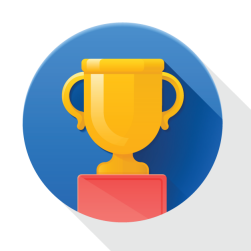 How in-text citations work
How reference list entries work
How to handle missing information
How to find the best example you need
in the Publication Manual
"Cite what you see, cite what you use"
How to avoid plagiarism

Translated sources (vs. your own translation)
Secondary sources (sources you found in another source) and why to avoid them
illustrators and illustrated books
Interviews
Legal references
Paraphrased work

Our institutional software product for learning, writing, research, and publishing, APA Style CENTRAL, has now been available to the public for a little more than a year. Check with your librarian to see whether your school subscribes.

We hope that these resources will be helpful to you as you write using APA Style. If you are interested in receiving tips about APA Style as well as general writing advice, we encourage you to follow us on social media. You can find us (and tell your friends) on Facebook, Twitter, and Google+.

If there’s a typo in a quotation, you use [sic] to show the reader that the error is in the original source and that you’re faithfully quoting it just as it appeared.

But, what if there’s a mistake in an article’s title? Do you add [sic] to the reference? We recommend not doing that, because it may appear to be part of the reference title. Instead, we recommend using a footnote.

First, know that typos in titles of published journal articles and book chapters are rare. If you think you’ve found a typo, there are a three things to check first:

If the article title really included a typo, explain in a footnote, if you want to ensure that your readers know that the mistake is not yours.

What’s in a Name? Names With Titles in Them

Here are some common examples of academic credentials and professional titles to omit from references and citations (note this is not an exhaustive list—anything in a similar vein will count):

Note that if you do want to mention an author’s academic credentials or professional title in the text because it is relevant to the discussion, you should use the format without periods (e.g., PhD, not Ph.D.; an exception is for abbreviations of a single word, such as Rev. for Reverend).

Exceptions for Religious Officials and Nobility

Exceptions to including the title in APA Style citations occur when the person’s title is in essence their name. For example, although Pope Francis was born Jorge Mario Bergoglio, he now writes using the name Pope Francis. Here is how to cite an encyclical letter by Pope Francis:

You should not abbreviate the Pope's name to Francis, P., because this would render it unintelligible to the reader.

And here is an example of how to cite a book by Prince Charles of Wales:

Note that the two authors who are credited after “with” on the cover are listed in parentheses in the reference list entry and are not cited in the in-text citation. (For more information on “with” authors, see page 184 of the Publication Manual, sixth bullet.) 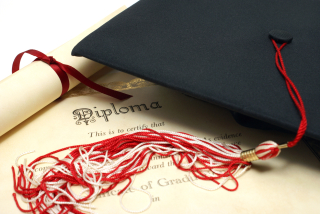 What’s in a Name? Authors With Only One Name

This post addresses how to cite authors who have only one name. These people include celebrities (like Madonna or [the artist formerly known as] Prince) as well as many people from Indonesia. To cite works by these people, provide the full name without abbreviation, because abbreviating the given name would render the name unintelligible. So for example, a work by Sukarno, the first president of Indonesia, would be cited as such:

This category does not include people who are well-known by their first name alone but who actually publish under their full name—for example, although you might know who Oprah is from her first name alone, she has published books as Oprah Winfrey and so would be credited in the reference list as Winfrey, O., and would be credited as Winfrey (or Oprah Winfrey) in the text—but never as just “Oprah” unless she published under only that name with no surname. 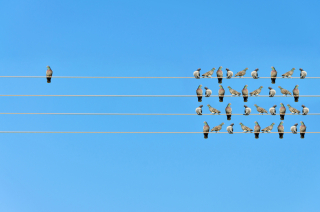 What’s in a Name? Cultural Variations in Name Order

Most people have one or more given names and a surname. However, the order of these names varies across cultures. This can create confusion when a writer is figuring out how to cite an author from a culture with different naming practices than the writer’s own.

To help you resolve questions regarding name order, do a little detective work. 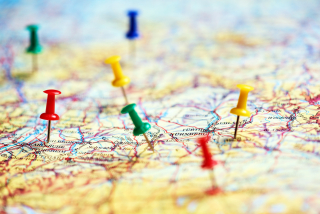 What’s in a Name? Inconsistent Formats and Name Changes

Although APA encourages authors to use one format for their name throughout their publishing career, inconsistencies do arise, and some authors choose to change their name for professional publication. This post addresses how to cite works in each of these circumstances.

Sometimes names are presented inconsistently across publications. If the author has used different forms of the same name on different works, then your reference list entries should match the form of the name on the work being cited for reasons of retrievability. For example, sometimes the author may use a middle initial and sometimes not (e.g., perhaps Jacob T. Baker sometimes publishes as Jacob Baker).

Another case is when an author has changed names, such as a surname change after marriage or divorce or a name change for a transgender author. Do not change the name on a work if an author has published under different names; cite the work using the name shown on the publication you read. In most cases, it is not necessary to note for the reader that two different names refer to the same person; just cite each work normally.

Making Note of a Name Change

Although in most cases it is not necessary to note that two different names refer to the same person, there are cases when it would be relevant or useful to do so.  For example, if you are reviewing multiple works by an author to describe the history of their research and a difference in name might confuse the reader, explain in the text that the two different names refer to the same person. Be warned; this might require some finesse to straighten out the citations. For example, you might write, 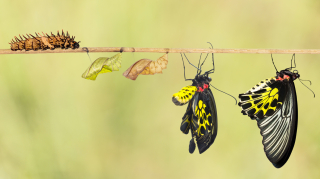 What’s in a Name? Two-Part Surnames in APA Style

The APA Style format for author names in reference list entries is to provide the author’s surname(s) followed by the initials of their given name(s).

In the in-text citation, provide only the surname(s) along with the year. (Note: The author's full name can be included in the in-text citation in limited circumstances, such as if the author is famous or if the whole purpose of the paper is to give an in-depth discussion of an author's work.)

Many different name formats are possible; for example, authors might have two surnames (with or without a hyphen), names with particles, and names with suffixes. Sometimes it might be difficult to determine whether a name is a given name or a surname.

However, in all cases, the name in the reference list entry and in-text citation should match the name on the work being cited. Your task now is just a matter of figuring out the proper format.

Here are some examples:

Is the Middle Name a Surname or a Given Name?

Sometimes it can be difficult to tell whether an author has two surnames without a hyphen or two given names and one surname—for example, is Maria Perez Garcia cited as Garcia (2017) or Perez Garcia (2017)? Here are some techniques to help you determine what name format to use: 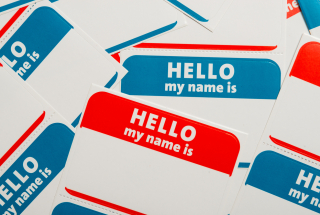 How to Alphabetize a Number

For numbers that represent years, use the way the year is commonly said to alphabetize the reference. For example, a reference beginning with 1984 would be alphabetized as though it were written nineteen eighty-four, not one thousand nine hundred eighty-four.

Got other numerical alphabetization questions? Ask away in the comments section. 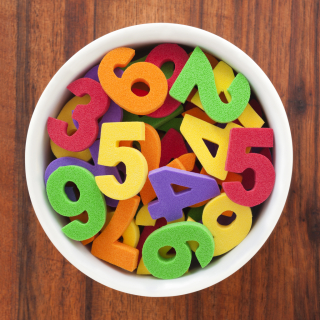 Posted by Chelsea Lee at 10:49 AM in Numbers and metrication, Reference list | Permalink | Comments (5) |

How to Create References When Words in the Title Are Italicized

Although the title of a journal article or book chapter is not usually italicized, sometimes words within the title may be italicized. These include book or movie titles, letters or words as linguistic examples, statistics, scientific names for animals, and other items that would be italicized in text, per APA Style guidelines.

If the title of the work is already italicized, as with a reference for a book, report, or dissertation or thesis, then the item that would otherwise be italicized is reverse italicized (meaning that it is in roman type within an otherwise italicized title).